It looks better with the roof on, doesn't it?

I kept landscaping to a minimum, so the focus would be on the unusual shapes of the house. if you look carefully, you'll see that even the roof tiles are crooked. It was really quite a struggle to get them that way. I put them on in strips, and they kept trying to be straight!

The chimney follows the sides of the house, and almost looks as if it has a wave in it.

There's a bit of a slant to the floors, so I thought of propping the furniture up on one end to make it level. However, I've beeen inside houses like this, and the occupants just seem to deal with the angles, so I decided to leave it alone. The little porcelain dogs in the basket are by Sylvia Mobley; I repainted the basket and liner so it matches the furniture.

Sometimes I decide on a project just because I know it will be fun to make - this is one of those!

The house is progressing, one story at a time. It's going slowly because with all the different angles, almost every piece is a different size.
If you look at the top floor, you can see the textured gesso undercoat I put on before painting.

Posted by Nell Corkin at 7:16 AM No comments:

And now for something completely different - a house that's intentionally all askew.

Some real half timber houses do look crooked, because they were built with unseasoned timbers that warped as they dried. This one is based on a design I made a few years ago, but I've changed most of the angles to be greater or less than square. It's amazing what a difference 2.5 to 5 degrees can make in this small scale.

This is a card stock mockup, something I do for new designs to make sure everything will fit together properly. There will be a chimney on the right side, but I didn't bother with that on the mockup, since it will just be added to the outside.

A Cup of Christmas Tea

In spite of that cold I mentioned, I have been busy. Philadelphia Miniaturia is less than three weeks away!

The tree is similar to the one in the Christmas room box, decorated with micro bead ornaments and tiny crystal "lights".
I get the little domes with turned walnut bases from Shoalts Collectibles. I think they are very elegant.

(Ooops! I didn't notice one of the pulls on the table was slightly askew when I took the picture.)
Posted by Nell Corkin at 8:31 AM 1 comment:

Finshed! It looks very much like the one from last spring - as it's supposed to. I keep notes and photographs of everything I make so that I can make another one when it's needed. There are always slight differences, of course.
The porcelain dog on the cushion is by my friend, Sylvia Mobley.

I've been working on a design I've made before - "Cozy Cottage". I'm also fighting a nasty virus cold, so I haven't been taking "in progress" pictures. If you would like to see one of these take shape, go to the Archive below, March 4-12.

I will post a picture when the house is finished; should be in the next day or so.
Posted by Nell Corkin at 9:04 AM 1 comment: 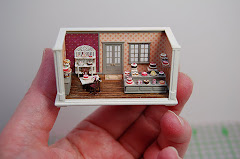 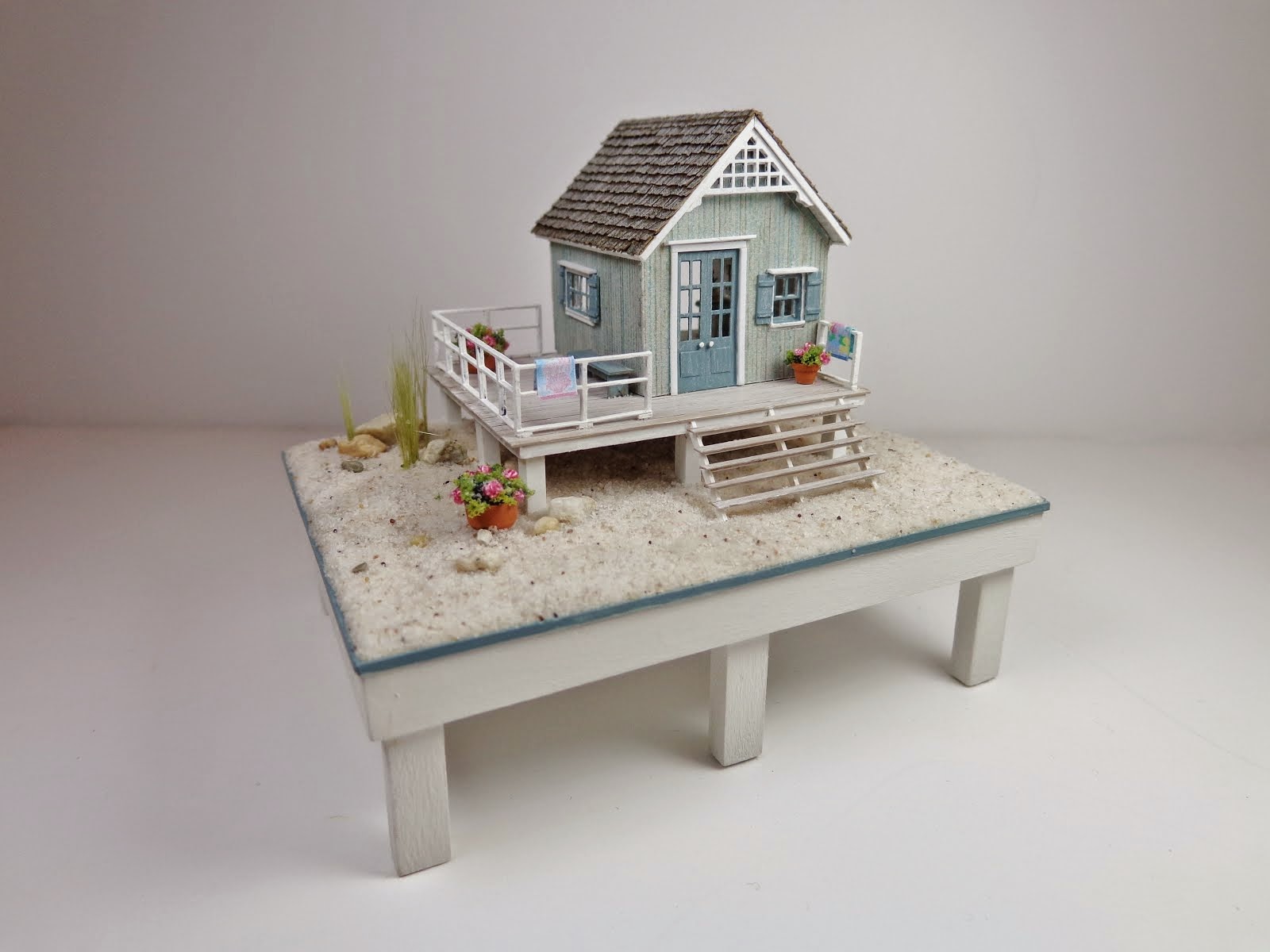 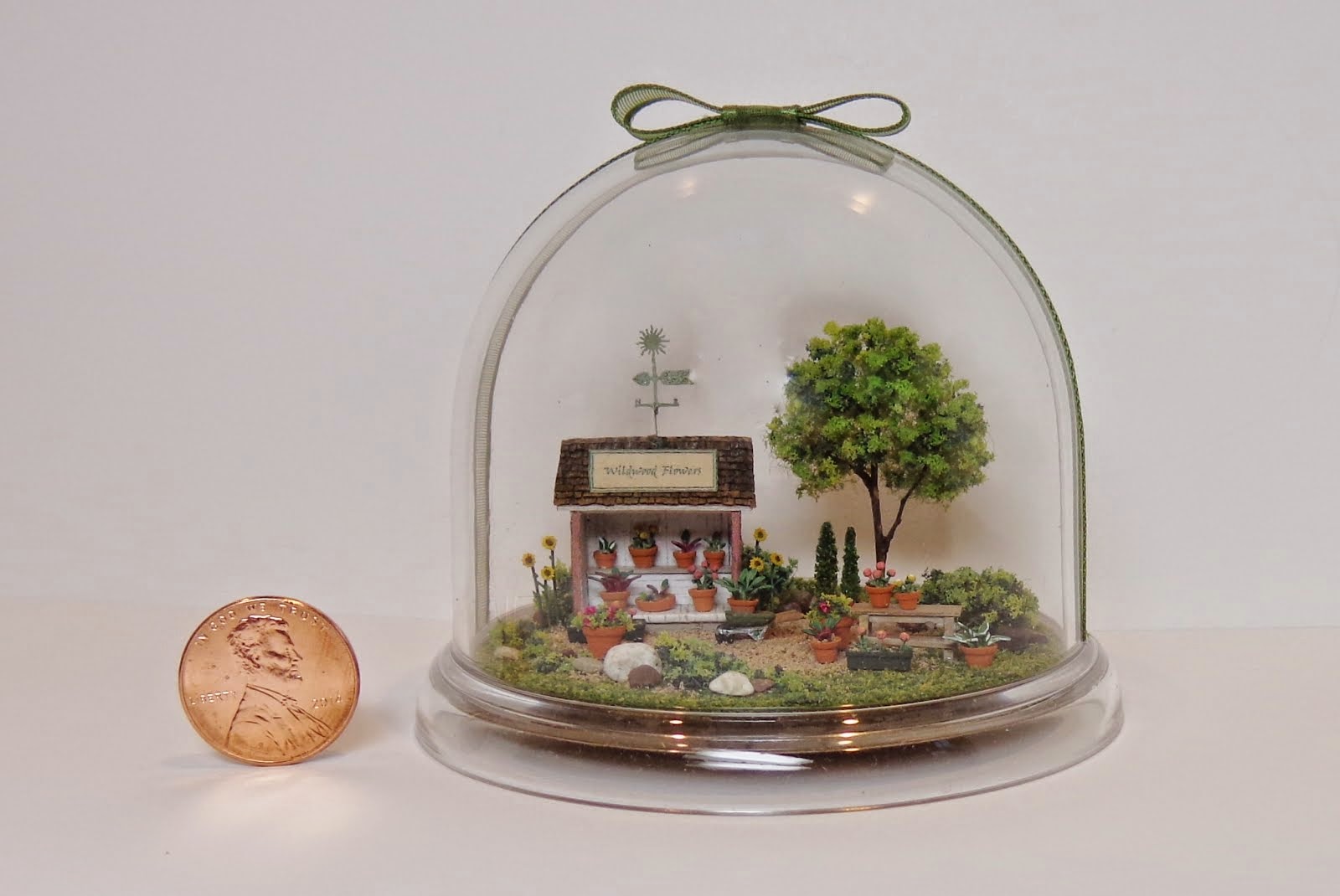 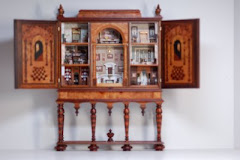 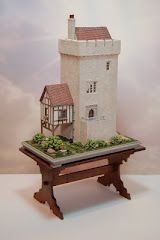 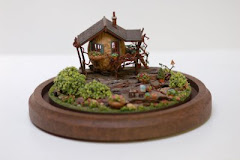